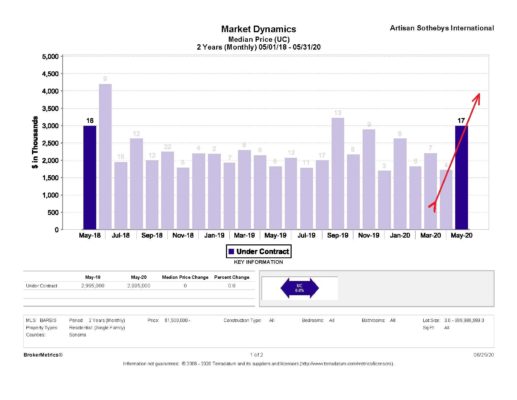 There’s been a huge surge in activity in the upper-end market for a couple of reasons.  First, we didn’t have a Spring selling season in 2019 because it rained all through Spring, and then in Fall we had another fire.  So, there was no Fall selling season in 2019 either.  During Winter we were feeling a decrease in market activity throughout the market starting with the upper-end falling in sales by 50% and then the same following down through the middle and lower-end markets.  I felt that we had crested the top of the market which has been going up for 11 years and is overdue to turn.  That said, I’m really not concerned about values coming down much in Sonoma County because we’ve had over 10% of our housing stock burn down just in the Tubbs fire alone, as well as very little construction since 2006 as well as being a destination area where people relocate to consistently.  So, I think we will be somewhat insulated against a downturn just as San Francisco was in 2008/2009.  However, that does not apply to vacant land.  We have a large increase in vacant land for sale also due to the fires.  Land that is not fire affected is more desirable than land that had a house burn down except when there aren’t utilities ready to begin building like the fire affected parcels have.  Also, many sellers of the fire affected parcels are selling at a discount just to create a sale and move on with their lives.

Getting back to the market conditions, this Spring we started to have a very strong season again.  I think that was pent-up demand from not having Spring or Fall seasons last year.  It felt like one more good surge was happening.  Then Covid hit us and everything stopped for a couple months.  When they opened up the real estate market again we all got hit with a surge in activity as I stated above.  There is the pent-up demand as I described above and there is another Covid related reason as well.  People from all over the bay area are coming up here looking at country property in the upper-end price segments for Sonoma County.  I would imagine Napa is experiencing the same.  I’ve heard that Novato has been getting this type activity as well.  People are wanting to get out of the city and move to the suburbs.  Companies all over are changing their business models and restructuring where it makes sense to allow work-from-home job programs which allows many people to move wherever they want, hence Sonoma County (again, because we’re a destination area away from the city but with all the conveniences people want and the wine country lifestyle too).  That’s driving the upper-end market in a way I have never seen before.  It’s not driving prices up per se, but it is creating selling opportunities where there were few to none before.  Properties that were struggling to sell before are now selling.  For example, in April there were 4 sales above 1.5 million with 3 or more acres throughout Sonoma County.  In May there were 17 sales that entered escrow with that same filter, and in June so far there have been 22 new sales go into escrow with an additional 17 properties that have closed escrow from sales created the previous month of May.

As a Broker, all the agents I talk to are in the same boat.  We are over-whelmed.  My thought is this is going to continue through Summer and into Fall.  Right now, we are only getting Bay Area Buyers coming up here.  I think later, if and when air travel gets more comfortable, we will get a surge of out-of-state Buyers as well that could keep demand up through the fall.  I think when Winter comes and the damage to the economy that Covid has done sinks in, we’ll see tightening in sales and the real cresting of the real estate market from isn’t 11 year up cycle turn as well as the economy in general begin to set in.  Again, I believe we are somewhat insulated here in Sonoma County against a significant downturn in the future.  I would not say the same for area’s like Sacramento and other parts of the country that are more prone to market swings and haven’t had such a decrease in housing stock as we have.  For now, its full steam ahead in a crazy way that is too much for us all to handle effectively, honesty.  I am not complaining though.  I am going with it as fast as I can.  The lower-end market is also experiencing very high demand up to around 750k.  The middle market above 750k to 1.5 million has had activity but is not as strong as either the lower-end or upper-end markets.